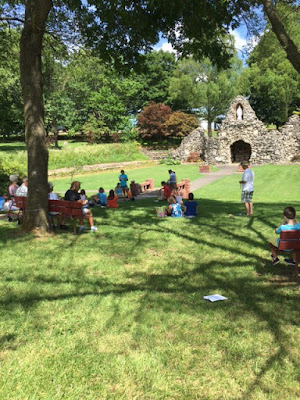 Members of the Children’s Rosary group at St. Paul Church in Fenton, Missouri made a pilgrimage to the Miraculous Medal Shrine in Perryville MO on July 13th 2016. Yesterday the group leader sent these pictures from their pilgrimage. The associate Pastor of their parish was able to lead the pilgrimage of 50 people.

The children also had the wonderful grace to walk through a Holy Door of Mercy at the Shrine.

Today the Children’s Rosary at St. Paul Parish will hold their monthly meeting at 7PM CT. This group holds their meetings on the 13th of every month. Please consider joining the children in prayer. The children always pray for those unifying prayers with them.

Other Posts You May Enjoy:
How to Start a Children’s Rosary
“With These Beads We are Building a World of Peace and Love”
Join the children each day to pray the Rosary
Source: Children’s Rosary