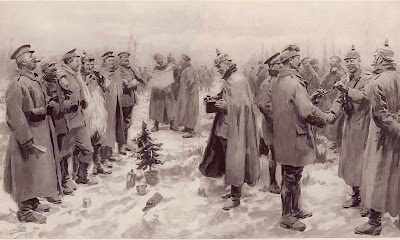 A few members of my family love history. Recently our youngest son, age 13, shared a story with us. It is the story of Christmas 1914. World War I was raging and on the Western Front something beautiful happened. Beginning on Christmas eve, soldiers on both sides began singing Christmas Carols. The following day two-thirds of the front observed a truce. Fighting stopped. Some soldiers even ventured into no-man’s-land to share gifts with their enemies. It is reported a games of soccer was played between members of the German Royal Saxon Regiment and the Scottish Seaford Highlanders. The Germans won the game three to two.

It is reported that in some places the truce lasted a week.

Peace is a great gift and it is one that our Prince of Peace is most eager to give us but we need to ask for this gift. Even in the midst of World War I Christmas Peace was felt.