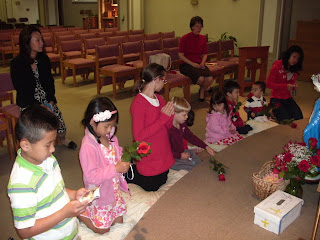 The ninth anniversary of the first meeting of the Children’s Rosary is on April 10th 2020. We have made it an annual tradition to offer a novena of Masses for the 9 days prior to the anniversary for the fulfillment of Our Lady’s plans for the Children’s Rosary. We then follow this with 9 days of Masses in thanksgiving. As our anniversary falls on Good Friday we will not be able to have any Masses said on that day. Rather we will have Masses celebrated from April 1st through the 9th. This will be followed by 9 days of Masses in thanksgiving starting on April 11th. The support for this effort has always been strong and for the past several years we were able to have three Masses offered on each of the 18 days. We have been able to arrange two daily Masses during each of the 18 days of the novena. Even as Churches are closed, priests we have visited in East Africa are helping to say these Masses privately. We hope to set up even more Masses during these 18 days.