Our Lady and the Baby Jesus Arrive in Kenya!

Our Lady and the Baby Jesus Arrive in Kenya! 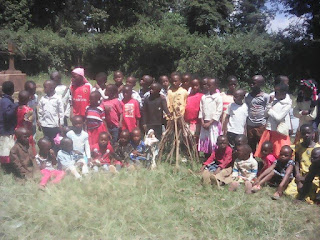 The Holy Family Children Rosary Group in Entarara, Kenya had a surprise.  The statue of Our Blessed Mother holding the baby Jesus that we sent in December finally arrived.  The children usually meet on a Sunday but they came together to receive the statue on a Tuesday. Br. Cleophus brought the statue to them.  The statue of Our Lady can be seen next to the teepee structure protecting some recent trees they planted from animals.  The trees were planted several weeks ago at a celebration they had. The group plans to make an outdoor structure next to their little Church to house Our Lady and the baby Jesus.  They were very excited to receive the statue. 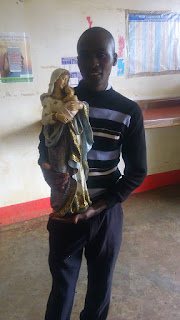 The group has been suffering a great deal with a severe drought.  The children have been working hard to find water and carry it to the animals. Br. Cleophus reported that the children have been faithful to watering the new trees they planted. They have not died despite the lack of rain. One of the reasons the children have asked for a statue of Our Lady is that they would like to bring their intentions and those of their families to Our Lady and Jesus.

We thank Br. Cleophus (pictured to the right) who traveled a day and night to pick up the statue at the post office and then bringing the statue to the children.  Thank you also for those who have helped in donating funds and statues which allow this work to continue.