Have You Ever Been to Interior Alaska? The Children’s Rosary in Fairbanks will Give You an Insider’s View

Have You Ever Been to Interior Alaska? The Children’s Rosary in Fairbanks will Give You an Insider’s View 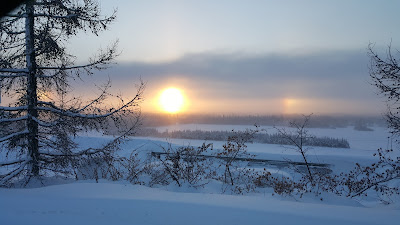 This is where the temperatures are so cold even the sun seems to play tricks on the eyes. Notice how the sun appears twice on the horizon.  This is called a Sun Dog.  There is another picture below which is a better example of this phenomenon which results when temperatures dip to their current level of -50 F. A fog can also be seen in the picture above. It is called an ice fog.  The skies can be clear at times but almost zero visibility on the ground. 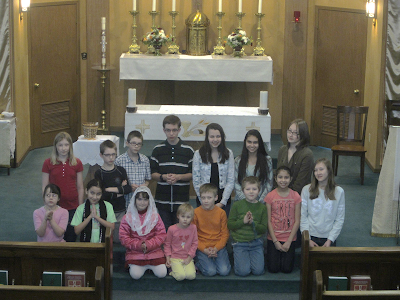 They brave the cold weather to meet on the First and Third Friday of every month at 11:30 AM local time (3:30 PM ET). They will be meeting today and they have a humble invitation.

Please Join Us in Prayer

They will be adding their light of prayer in the dark and cold expanse of interior Alaska.  The group can be seen as a blue flashing light on our new View from Heaven map when they are meeting today.  Pull the map just a bit to the right so you can see all of Alaska.  The schedule of meetings is present next to the map and provides all the meeting times of groups today in your local time zone.  Click the button “Join in prayer” on our website and you can add your light to the map and also be unified in prayer with the children in Alaska and others also joining together in prayer. The children have been asked to pray for those unifying prayers with them. So when you join them in prayer, they are praying for you! It is also very exciting for the children to see others around the world praying with them as they meet in their prayer group.  Light is very important to those living in regions so far north where most of the day is dark. 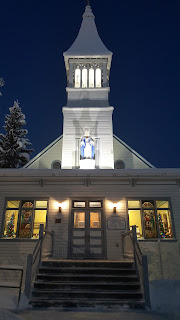 The photo to the right of Immaculate Conception Church was taken at 9:30 AM local time on December 19th: the shortest day of the year. Notice how little light they have during this time of year.  Sunrise was at 11:10 AM and sunset 2:30 PM. There is also several hours of twilight.

One of the group leaders shares:
“We only had about a foot of snow on the ground that had accumulated between October through early December and before the additional two feet we recently received. You might like the view of Mary with the snow on her shoulders. Although it is difficult to see, the stained glass window on the right shows an image depicting how the church was dragged by horses across a frozen river to its current location around 1919 (with the long cold winters and arctic temperatures at times, ice can be 40+ inches thick here by April).”

The little church looks so welcoming with the lights warmly glowing from inside. The children through their prayers are like a little light in the darkness as well.  One can imagine the children gathered together praying with Our Lady watching over them.

The Children’s Rosary group in Fairbanks would like to share some of the highlights of living so far north!  This past week one of the members sent us a picture from his driveway.  An incredible view of the Northern Lights. This photo was taken with a phone. 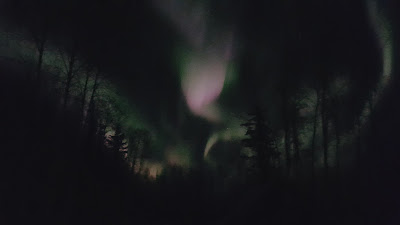 The daytime temperature the past few days have been around -50 F.  Night time lows have dipped to -60 F.  The group has been sharing some interesting phenomenons that occur at these low temperatures. We have been learning a lot.

At temperatures this low if one takes a cup with hot water and throws it into the air it can go straight into a cloud of snow before hitting the ground.  See a recent example of this from the National Weather Service in Fairbanks on January 18th HERE. My kids found this very cool.

Another Example of the Sun Dog phenomenon is pictured below. The sun is only really in the center of the picture. 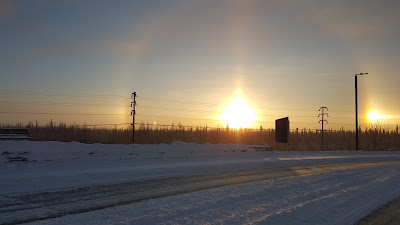 If you want to brave these frigid temperatures the children share there are some exciting events coming up:

http://www.yukonquest.com/  1,000 mile dog sled race between here and Whitehorse, Yukon Territory, Canada. Competition is 14 days away.
http://www.icealaska.com/en/ The International Ice Carving competition (they recently suffered a fire). Ice slides and ice playground is also open the month of March.
http://www.nenanaakiceclassic.com/ When will the Tanana River break-up in April or May? If the ice 45 to 50+ inches thick, it can be a while.